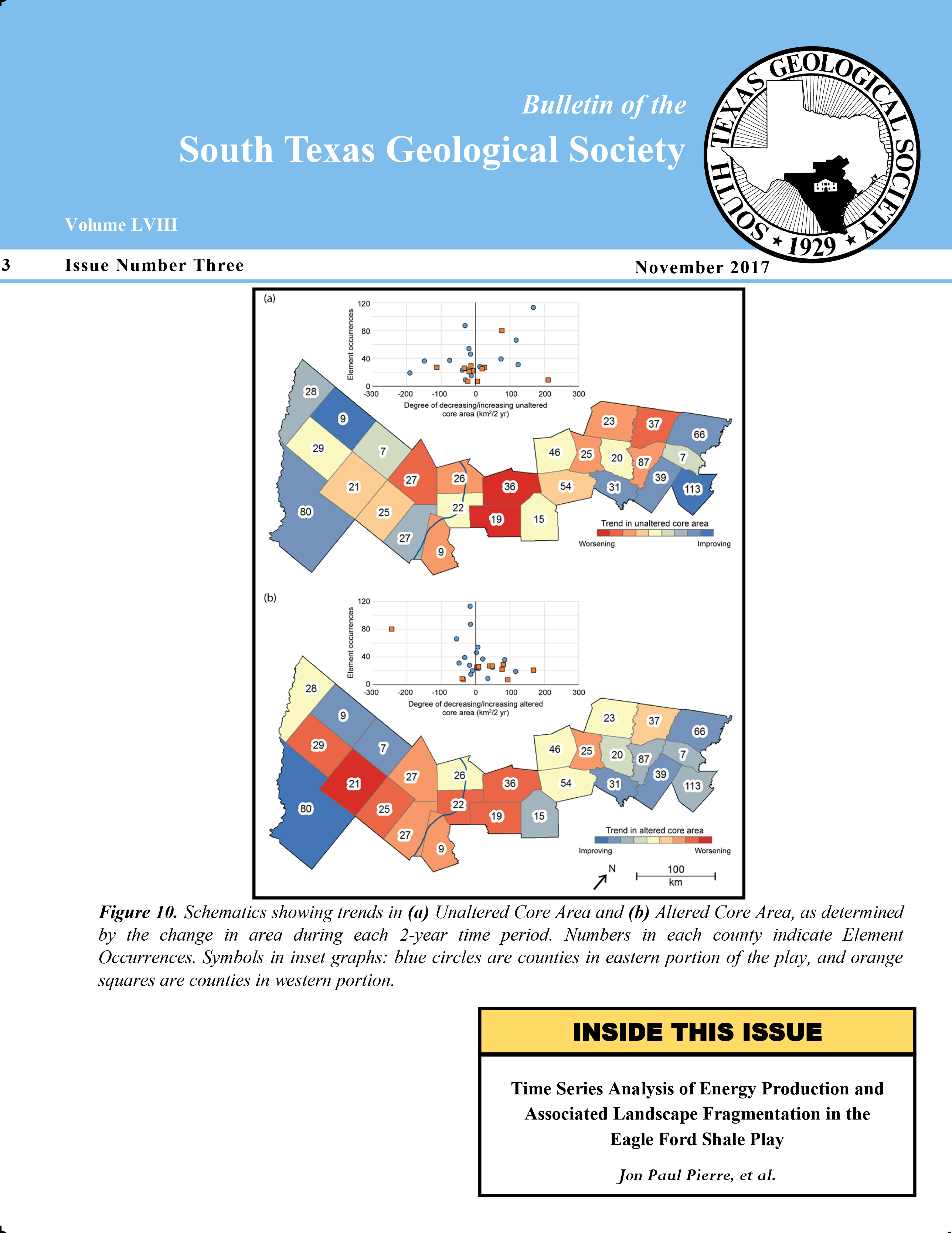 Time Series Analysis of Energy Production and Associated Landscape Fragmentation in the Eagle Ford Shale Play
Jon Paul Pierre1†, Michael H. Young1, Brad D. Wolaver1, John R. Andrews1, and Caroline L. Breton1
1Bureau of Economic Geology, Jackson School of Geosciences, The University of Texas at Austin, Austin, Texas 78758, USA
Originally published in Environmental Management, August 2017
©Springer Science+Business Media, LLC 2017
† Corresponding author. Tel.: +1-512-471-4560
E-mail address: jonpaul.pierre@beg.utexas.edu
Abstract
Spatio-temporal trends in infrastructure footprints, energy production, and landscape alteration were assessed for the Eagle Ford Shale (EF) of Texas. The period of analysis was over four 2-year periods (2006 to 2014). Analyses used high-resolution imagery, and well and pipeline data to map EF infrastructure. Landscape conditions from 2006 were used as baseline. Results indicate infrastructure footprints varied from 94.5 km2 in 2008 to 225.0 km2 in 2014. By 2014, decreased land-use intensities (ratio of land alteration to energy production) were noted play-wide. Core-area alteration by period was highest (3,331.6 km2) in 2008 at the onset of play development, and increased 582.3 km2 to 3,913.9 km2 by 2014, though substantial revegetation of localized core areas was observed throughout the study (i.e., alteration improved in some areas and worsened in others). Land-use intensity in the eastern portion of the play was consistently lower than in the western portion, while core alteration remained relatively constant east to west. Land alteration from pipeline construction was ~65 km2 for all time periods, except 2010, when alteration was recorded at 47 km2. Percent of total alteration from well-pad construction increased from 27.3% in 2008 to 71.5% in 2014. The average number of wells per pad across all 27 counties increased from 1.15 to 1.7. This study presents a framework for mapping landscape alteration from oil and gas infrastructure development. However, the framework could be applied to other energy development programs, such as wind or solar fields, or any other regional infrastructure development program.