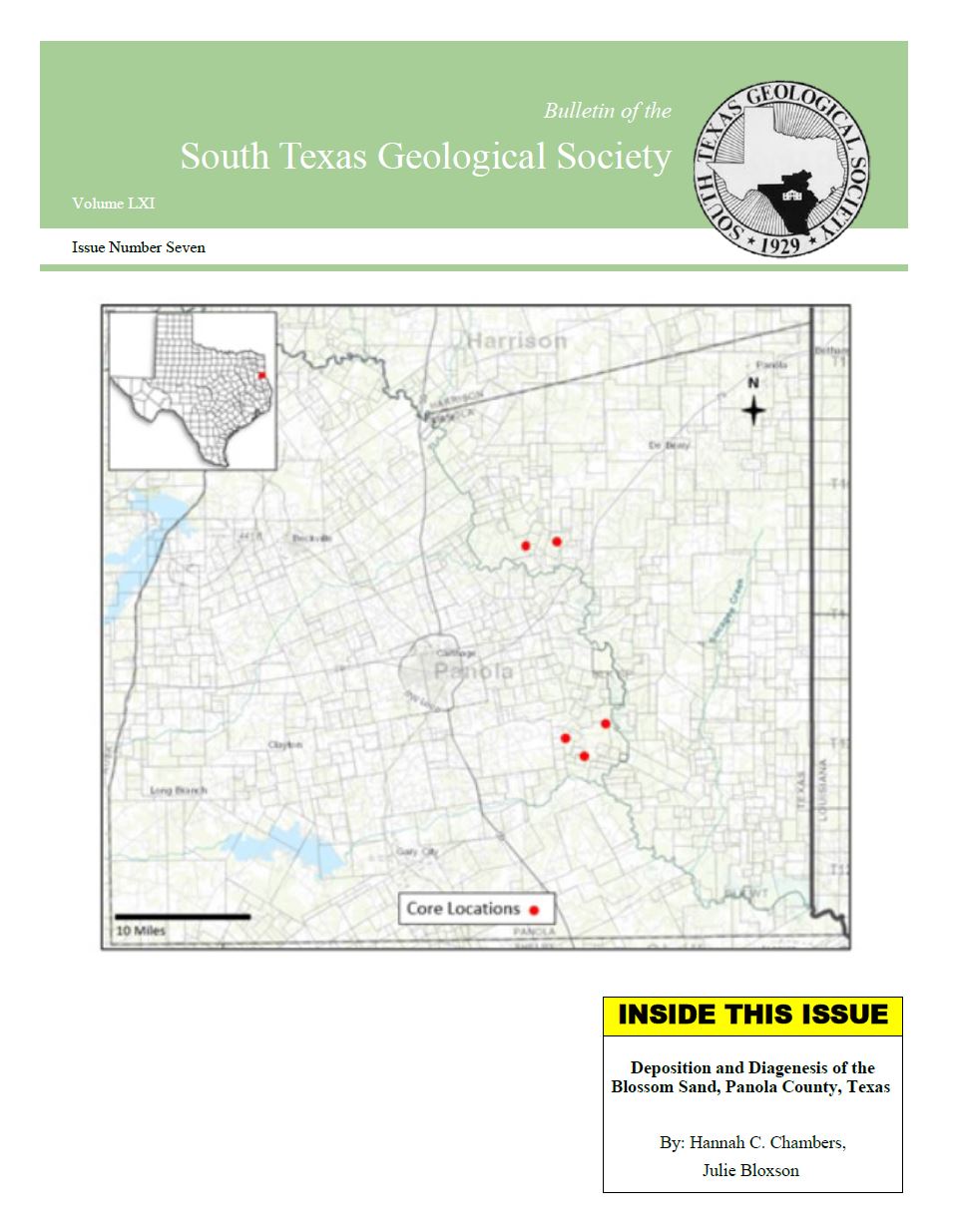 Deposition and Diagenesis of the Blossom Sand, Panola County, Texas
By: Hannah C. Chambers, Julie Bloxson
ABSTRACT
The Late Cretaceous Blossom Sand within the Austin Group is a historic gas reservoir in the East Texas basin, located at depths of approximately 2,000 ft below the surface. Since the discovery of the Carthage Field in 1918 in the East Texas Basin, the Blossom Sand has produced approximately 26 BCF of gas with minor amounts of oil. Despite its notoriety in the Carthage Field, there is very little research that has been conducted on this unit, although it crops out in northeast Texas and is found in the subsurface of southwest Arkansas, western Louisiana, and the East Texas Basin. The origin of its sediments, clay minerals, and depositional style have gone largely unknown. This study provides insights into the depositional environment and diagenetic history of the Blossom Sand using thin section analysis, x-ray diffraction (XRD), x-ray fluorescence (XRF), scanning electron microscopy (SEM), and porosity and permeability measurements. Each of these methods were used to identify clay minerals and their associations and variability, and correlated with porosity/permeability throughout the core to determine controls.
The major minerals found in this formation include quartz, calcite, and illite; accessory minerals include, plagioclase, muscovite, biotite, hematite, and siderite. Despite the literature stating that glauconite is common, it was not detected in any of the analyses. The Blossom Sand is composed of two major sand facies that contain planar lamination, wavy bedding, bioturbation, pellets, casts and molds of Inoceramus sp. bivalves and one specimen of Exogya sp. These sand facies are interbedded with shales and siltstones throughout. The porosity varies from 2.6-33.7% with an average of 23.8%, while the permeability varies from 0.0002-146 mD, with an average of 25.4 mD. The porosity and permeability are inversely correlated with calcite content based upon Ca from the XRF data, indicating that calcite cement is the main controlling factor on porosity and permeability within the Blossom. The fine sands and sedimentary structures indicative of multidirectional currents and shallow marine fossils suggest that the sands were deposited in nearshore environments. The presence of trace fossils such as casts and molds indicate that dissolution and redistribution of local biogenic carbonate resulted in the calcite cement that controls the porosity and permeability of the Blossom Sand. Gaining a better understanding of the nature of porosity and permeability in sandstone reservoirs like the Blossom Sand can improve success in oil and gas exploration, secondary recovery, or carbon capture and storage.