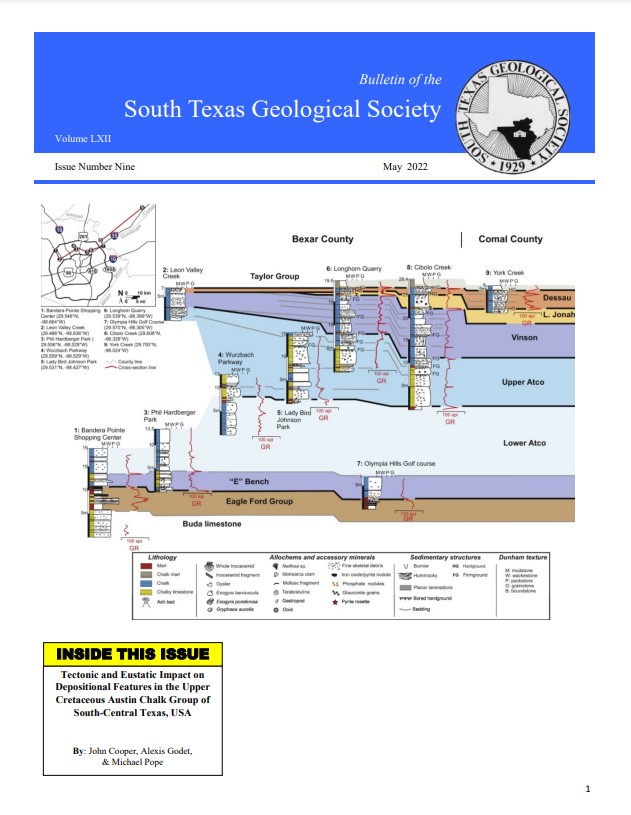 The upper Cretaceous Austin Chalk Group in south-central Texas, USA, displays vertical and lateral variations in thickness and facies resulting from an irregular paleotopography of the seafloor and variable preservation of 3rd -order sea-level cycles. During the Coniacian to early Campanian, the tectonic evolution of the San Marcos Arch, a prominent basement feature in the study area, impacted facies and sequence architecture within the Austin Chalk Group. Outcropping sections of the Austin Chalk Group along the margin of the Edwards Plateau in south-central Texas stratigraphically transition between inner and outer ramp environments. The cyclic stacking pattern of facies is recorded in vertical stratigraphic succession as 3rd -order cycles separated by discontinuity surfaces and condensed deposits. Inner ramp facies consist of Thalassinoides-burrowed bivalve wackestone to packstone with minor occurrences of skeletal grainstone. Outer ramp facies comprise Planolites-burrowed foraminiferal chalk and marl with fine skeletal debris. Condensed facies associated with transgressive re-working are characterized by glauconitic packstone with high concentrations of coarse skeletal debris and lithoclasts. Gamma-ray profiles of outcrops investigated in the study area are correlated to subsurface wireline logs of wells drilled along the outcrop and subsurface trend, in order to construct a stratigraphic framework across the San Marcos Arch. This stratigraphic framework is biostratigraphically well constrained and correlated to the type section of the Austin Chalk Group farther north in the vicinity of Austin. The integration of sedimentological and stratigraphic information enables the identification of four regional 3rd -order depositional sequences within the Austin Chalk Group. Thickness maps of each depositional sequence illustrate the tectonic evolution of the San Marcos Arch and its influence on the deposition of the Austin Chalk Group, which is judged as negligible during most of the lower Austin Chalk Group (Coniacian), and started to trigger lateral thickness variations and pinch-outs in the Santonian and early Campanian. Syndepositional tectonic movement played an active role in the geometry of Austin Chalk depositional sequences and should be accounted for in sequence stratigraphic models developed in chalk depositional settings to explain the occurrence of coarser and cleaner facies.