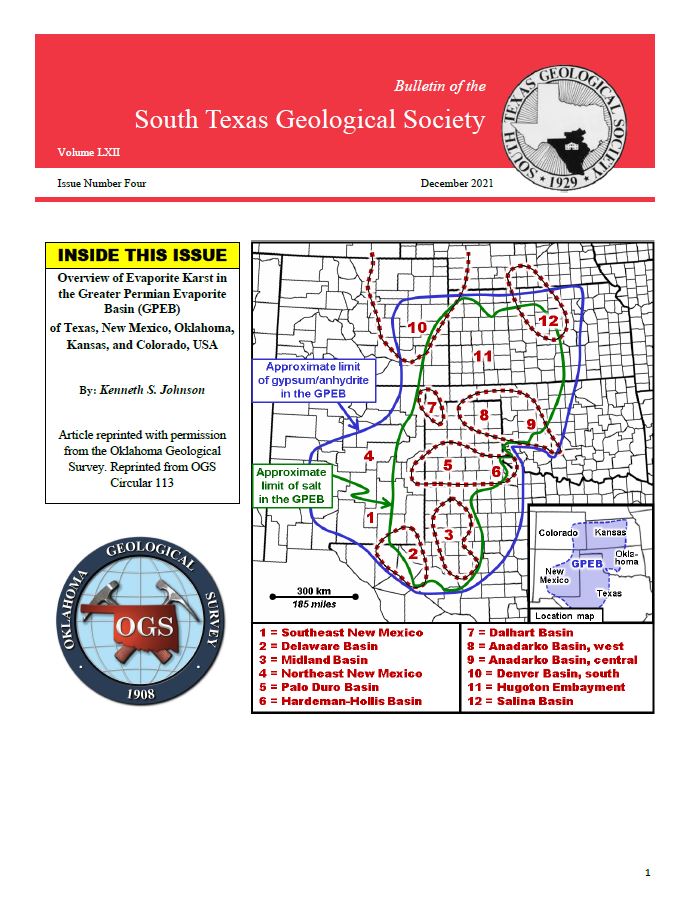 Overview of Evaporite Karst in the Greater Permian Evaporite Basin (GPEB) of Texas, New Mexico, Oklahoma, Kansas, and Colorado, USA
Kenneth S. Johnson
Retired Geologist
Oklahoma Geological Survey
Norman, Oklahoma
ABSRACT—One of the major evaporite regions in the world is herein named the Greater Permian Evaporite Basin (GPEB). This evaporite region extends far beyond the traditional Permian Basin of west Texas and southeast New Mexico, and embraces about 650,000 km2 in parts of Texas, New Mexico, Oklahoma, Kansas, and Colorado. The eight main Permian evaporite sequences, each containing salt (halite) and gypsum and/or anhydrite, have a combined thickness generally ranging from 500–1,500 m in various parts of the GPEB, and the evaporites extend from west Texas to northern Kansas and northeast Colorado. The GPEB embraces a number of major structural and/or sedimentary basins, including the Delaware, Midland, Palo Duro, Hardeman–Hollis, Dalhart, Anadarko, Denver (south), Hugoton, and Salina Basins, each of which contains one or more thick sequences of Permian evaporites. Gypsum and/or anhydrite deposits are more widespread than salt deposits in the GPEB: anhydrite is the common form of calcium sulfate at depths below about 15–30 m, whereas gypsum is almost always the calcium sulfate at shallower depths and in outcrops.
Evaporites are the most soluble of the common rocks. Salt (halite, NaCl) and gypsum (CaSO4•2H2O) can be dissolved naturally, or by human activities, to form the same kinds of karst features present in limestone and dolomite, such as caves, sinkholes, breccia pipes, disappearing streams, springs, and even catastrophic collapses (sinks, or sinkholes). Anhydrite (CaSO4), in contact with water, transforms to gypsum and then is susceptible to dissolution. Water in contact with salt or gypsum will dissolve some of the rock, if the water is unsaturated with respect to NaCl or CaSO4, respectively, and will continue to dissolve the rock if it is contacted by more unsaturated water. Evaporite karst is present in most parts of the GPEB.
Salt sequences underlie about 380,000 km2 of the GPEB, and salt karst occurs naturally where the deep-seated salt beds rise to shallow depths of about 150–300 m. Each of the eight evaporite sequences in the GPEB has areas where natural salt dissolution occurs at least somewhere in the region. Two major examples of natural salt karst are: 1) large subsidence troughs in the Delaware Basin that are now filled with Cenozoic sediments; and 2) extensive dissolution of San Andres and Flowerpot/Blaine/Yelton salts in the Texas Panhandle, western Oklahoma and Kansas, and southeast Colorado. Salt karst can also occur when human activity, such as solution mining or some petroleum-related activities, enables unsaturated water to intentionally, or accidentally, dissolve the salt and create a water-filled cavity large enough to allow failure of its roof, and eventual collapse that can reach the land surface as a huge sinkhole. Examples of human-induced salt karst due to solution mining are the Cargill, Denver City, Borger, JWS, and Loco Hills Sinks. Salt-karst sinks related to petroleum or water-supply activities include the Wink, McCamey, Jal, Panning, Berscheit, Hilton, Witt, and Crawford Sinks; other features related to petroleum activities are the Hutchinson gas explosion, the Freedom gas blowout, and Pecos County subsidence.
Gypsum deposits underlie the entire 650,000 km2 of the GPEB, and natural gypsum karst is common and widespread in areas of gypsum outcrops on the east and west sides of the region. Gypsum caves and sinkholes are abundant in the Delaware Basin of west Texas and southeast New Mexico, and include the Parks Ranch Cave which, with a total length of 6,596 m, is the second longest gypsum cave in the western hemisphere. And on the east flank of the GPEB, the other major gypsum-karst area in the GPEB, major caves in Oklahoma include: 1) D.C. Jester Cave, which, with a total length of 10,065 m, is the longest gypsum cave in the western hemisphere; 2) Alabaster Cavern, developed as a major tourist cave; and 3) Selman Cave, which is now an outdoor living laboratory and field station dedicated to research and teaching. Natural gypsum karst has caused abandonment of proposed and actual dam sites in Oklahoma, Texas, and New Mexico. Gypsum karst can, however, be an advantage: the fresh-water Blaine aquifer provides irrigation water in southwest Oklahoma and north-central Texas. Although gypsum karst can also be accelerated by human activities, the only examples in the GPEB are: 1) reservoirs that are now losing water through gypsum-karst features; and 2) reservoirs that had been proposed or built (and are now abandoned) in areas of gypsum karst.