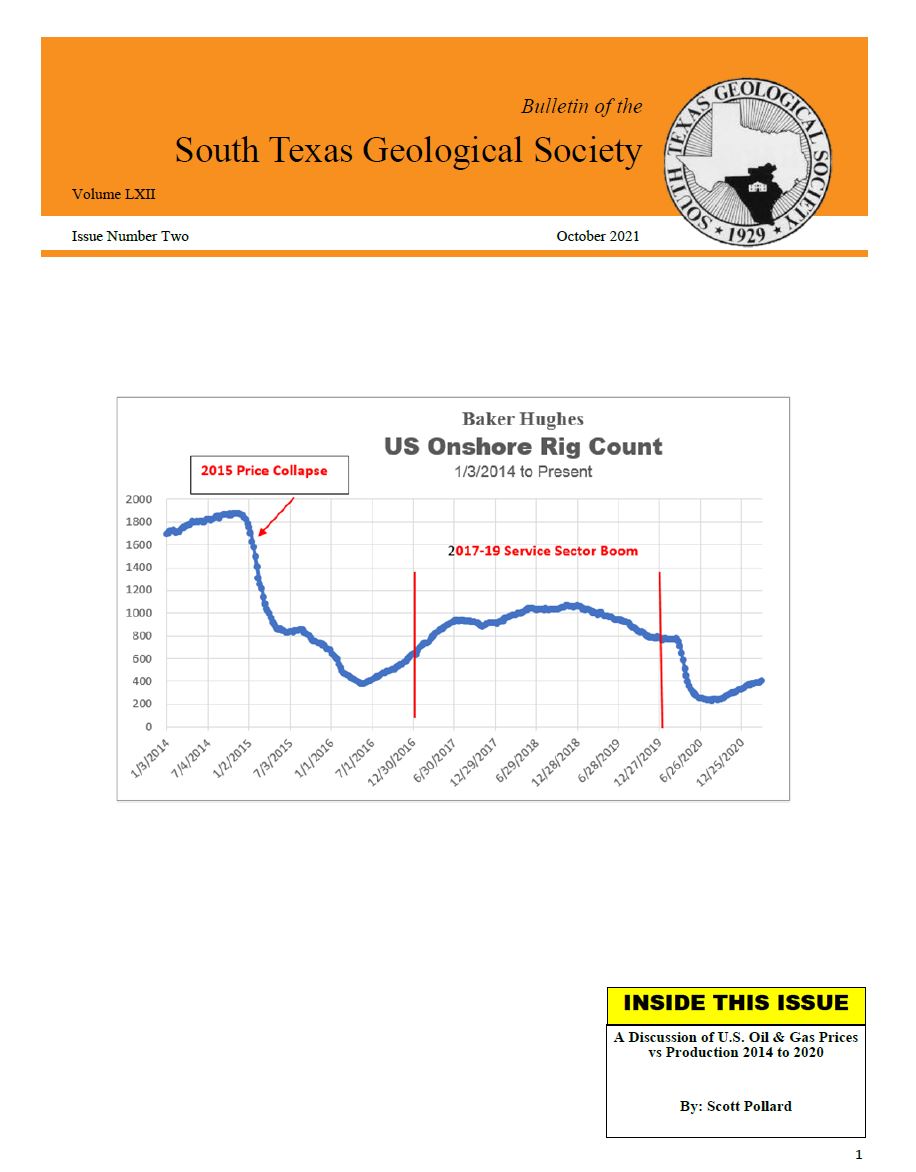 U.S. Oil & Gas Prices vs Production 2014 to 2020
(2017 to 2019 Service Sector Boom)
A Discussion by Scott Pollard
I have been a Petroleum Geologist and Oil Scout for 40 years now. Since the crash in natural gas prices in 1981 and subsequent collapse of oil prices in 1986 I have been monitoring Oil and Gas prices. It was easy to believe they were the key to my business financial future. I often have reduced my observations to writing on current situations. Recently I have felt compelled to take a longer look back as so many people seem to be misguided as to how got in the situation we are in and where we might go from here. It is more than I have attempted before so I titled it my Magnus Opus.
Analysts and Journalists tend to explain the world of Supply vs Demand on a “Week to Week” and “Year over Year” basis. There are longer trends. This affects how they view the world and how they present it to us. They also assign omnipotent powers to drive trends up and down as opposed to market forces. There are many forces at work. The years 2017 through 2019 are one of the of greatest stories never told. These years were remarkable in terms of the US Oil and Gas production. Certain sectors of the industry were very active. In the end few operators were able to generate net income or Free Cash Flow. A friend and operator from Midland, Donny McClure, described it as a “Service Sector Boom”.
Most media and industry analysts explain it all as OPEC vs US Shale (as if that were a single entity) and their battle for market share. It is often poorly described and sometimes flat wrong. In the end it is the questions that don’t get asked that bother me the most. For example, it was oft described that Saudi Arabia and Russia drove the price down because they refused to come to an accord. At the time due to pandemic worldwide oil consumption was down 30%. It was not a matter of if they would cut because there was no market for their oil. Cut production or pour it on the ground. Worldwide consumption had been about 100 MMBOPD. That means consumption was down 30 MMBOPD. Russia exports 6 MMBOPD. Saudi Arabia exports 9-10 MMBOPD. They both could export 0 Bbls and there still would be too much oil. The media acted like these two oil dependent nations could take the price to $0/Bbl in order to obtain market share. It would be cheaper to pour it on the ground. I never heard the question, “Can either of these countries afford not to cut?”. Based on what Saudi provides to its government they require a $65/Bbl oil price to breakeven. Forty percent of the Russian budget comes from oil and gas sales. They were going to cut oil exports to-gether or they were going to cut separately. The rest was theater. They came to an accord on April 12, 2020 but the price continued to fall. Why? We were in a pandemic and Demand was down by 30%!
How can you ever guess where you are going if don’t know where you have been? Look at US Oil and Gas production over the past six to seven years. See if it matches the story you have been told. It is true the industry has come to be dominated Shale activity. On 8/20/2021 the Baker Hughes Rig Count showed 90.3% of wells being drilled were horizontals. Most of these are Shale wells. The years 2017 to 2019 have got to be some of the most remarkable years ever on record in the Oil and Gas Industry, yet production companies seldom showed a profit. Is Shale production amazing? Is it unprofitable? Can it be both?
In the heady days of 2011 through 2014 it was obvious why we were so excited. Oil prices were hovering around $100 per barrel and gas prices while not as good as in 2008 but they weren’t bad with prices in the $4-5 per MCF range. Even natural gas liquids were trading at 85% of a barrel of oil. Beginning in June 2014 oil prices began to fall. By November they began to fall precipitously and by February of 2016 oil was below $30/bbl. Natural Gas fell to $2/MCF and NGL’s fell to 35% of barrel of oil ($10-11/bbl). Obviously, this was a disaster. Activity and then production responded accordingly.
Most of us, when wanting to assess the health of our industry, turn to Baker Hughes to see what the Rig Count is. With a drop in commodity prices in 2014 to 2016 Rig Activity plummeted as you would expect. Rig activity did bounce back in 2017 but it only recovered about half of rigs lost during the downturn. Rigs weren’t really “booming”. With the advent of Shale production, a new concept evolved; the DUC (drilled but uncompleted lateral). The well’s lateral could be drilled and cased and the completion could wait an indeterminant amount of time until it was more opportune. Since completion costs accounted for 2/3rd to 3/4th of the well cost this made sense. This really diminished Rig Counts as a tool to evaluate the industry. How many wells were completed and how much production was brought on was not directly linked to how many rigs were running.