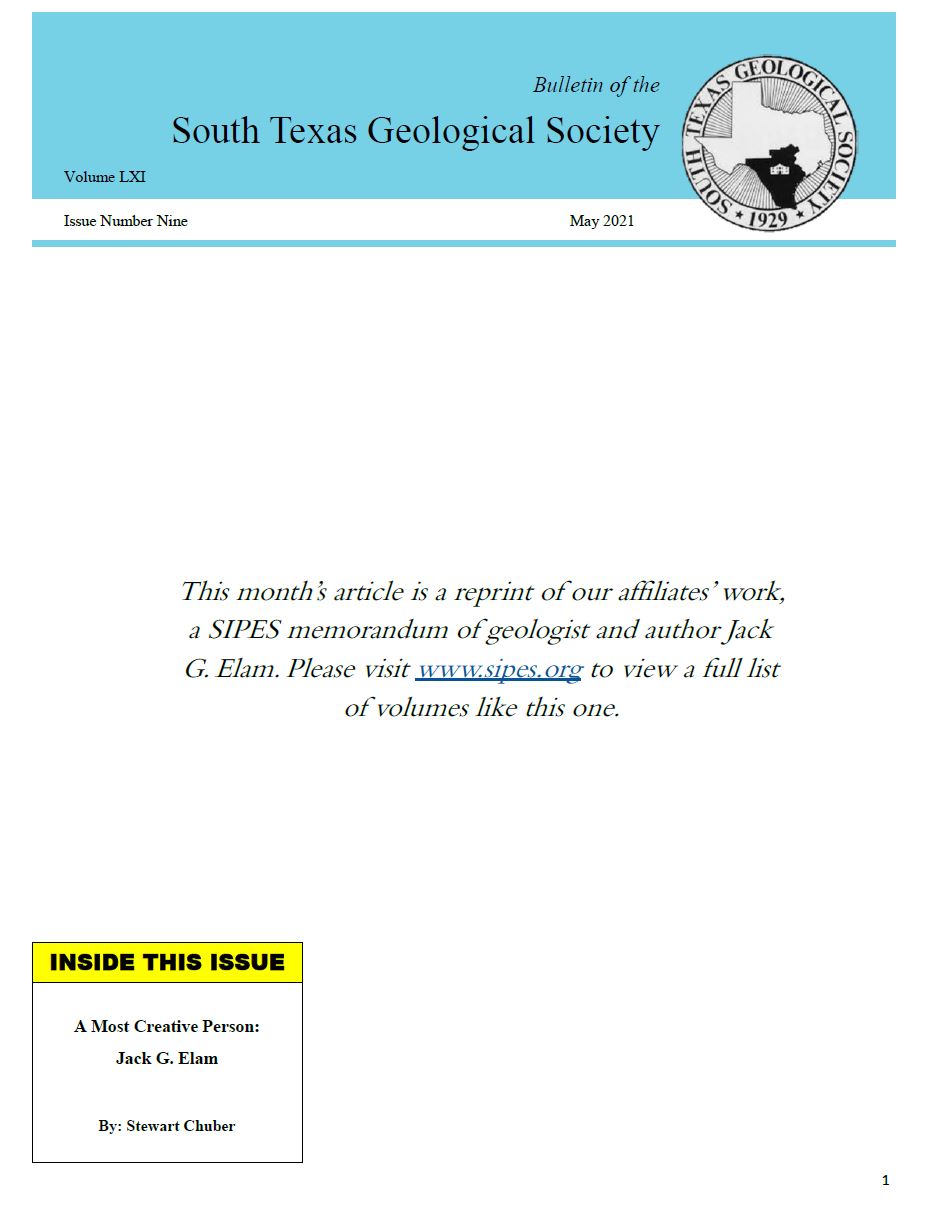 Introduction
I was introduced to Jack Elam
at a Midland Chapter SEPM meeting
in the Fall of 1962. He was the speaker
at an informal gathering (Jack's
favorite style), and his topic was
fracture pattern analysis using USGS
topographic sheets. One of his
examples was the Puckett Gas Field.
In just a few minutes Jack
demonstrated how to use the fracture pattern technique,
and how it can help define structure. For me it became,
and remains today, my first exploration tool in a new area.
My previous oil experience was largely surface
mapping; three years in the Sacramento Valley in my
thesis area, and three years with Mobil in Libya. My only
subsurface knowledge was of the clastic section in the
northern great Valley, mainly Mobil's Willows Beehive
Bend Gas Field, working in Sacramento and Bakersfield.
I left Mobil after nine years and joined Franco Western
Oil Company in 1962 and moved to Midland to start exploring
in the Permian Basin. My province was the Eastern
Shelf, one of Jack's favorite areas at that time. I
screened submittals, started regional mapping, and began
generating prospects. Franco purchased an interest in one
of Jack's flanking reef ventures in Scurry County, and,
under Jack's careful scrutiny, I started to learn about well
site geology: sample logging, cuttings description, drilling
time correlations, carbonate logs, cross sections and
contour maps. He was my first real mentor! In 1965 I
became an independent geologist (Mobil bought Franco),
and I officed next to Jack in downtown Midland with a
retainer for Buttes Gas and Oil. Jack was against
retainers, although he had several; he always said a
geologist was more creative when he was really hungry.
We generated a couple of unsuccessful prospects, but I
learned how to look for oil and gas, and to ask the right
questions. It was a terrific learning experience for me. In
1968 Buttes offered me a position in Houston and, at
Jack's suggestion and my own inclination, I started Gulf
Coast exploration in the "headquarters" of the oil
business. Thereafter Jack and I went separate ways, he
into the structural evolution of the Permian Basin, and I
into Gulf Coast stratigraphic traps. We made contact at
AAPG ACE or regional meetings and at the SIPES
annual meetings. We always discussed our new geologic
prospects and invested, sometimes successfully, in them.
He was enthusiastic about everything geologic, and he
never failed to recontour the maps in my ventures. We
met socially as well, whenever possible, and spent two
weeks sailing, swimming and scuba diving with our
wives in the British Virgin Islands.
Still later I collaborated with Jack in preparing
and selling his deep Ellenberger West Coyanosa
Prospect. It was an excellent illustration of his thesis
about dilational rifting in the Permian Basin, but not his
biggest prospect. Coyanosa was dry in the Ellenburger,
but had multiple pays in the shallower Penn and Permian
strata. Jack always believed the "stumble" factor worked
well in the Permian Basin.
A Most Creative Person: Jack G. Elam, #124
by Stewart Chuber, #221 — Schulenburg, Texas
This month’s article is
reprinted with permission
from our affiliate, SIPES
South Texas Geological Society May 2021 14
Bulletin of the
South Texas Geological Society
A few months before Jack died in
2003, his wife, Pat, called to say that I
could come and take whatever files and
writings Jack had in his office that I
wanted. We packed boxes of material
and dozens of maps, cross sections,
illustrations and exhibits and I brought
them to my office in Schulenburg. As it
happened, I became involved in
developing some good production in a
Wilcox stratigraphic trap near home in Lavaca County.
Thus, until the opportunity to review Jack's geologic
philosophies came up this month for the SIPES Quarterly,
I have not opened a single one of his files!
There are about 100 articles that Jack wrote between
1967 and 1996. I have chosen several that demonstrate
Jack's passion for geology and his suggestions about doing
exploration work and defining prospects. A book could be
compiled, but I have tried to boil it down by including the
following articles:
1. Preface from Creativity in Oil Exploration
2. Excerpts from "Track Record."
3. "Psychological Barriers to Creativity," abbreviated
publication in 1987 by the Houston Geological Society.
4. Oil Finder Survey; questionnaire of Ted Beaumont for
authors of AAPG Treatise of Petroleum Geology, Reprint
Series, No. 20, published in 1993.
I often think fondly of Jack. He was not only a true
friend but also a great mentor. His ability to visualize and
contour maps are indeed "works of art." His incisive deductive,
and inductive reasoning and his search to answer
the question "why," all led to an outstandingly creative
geologist.