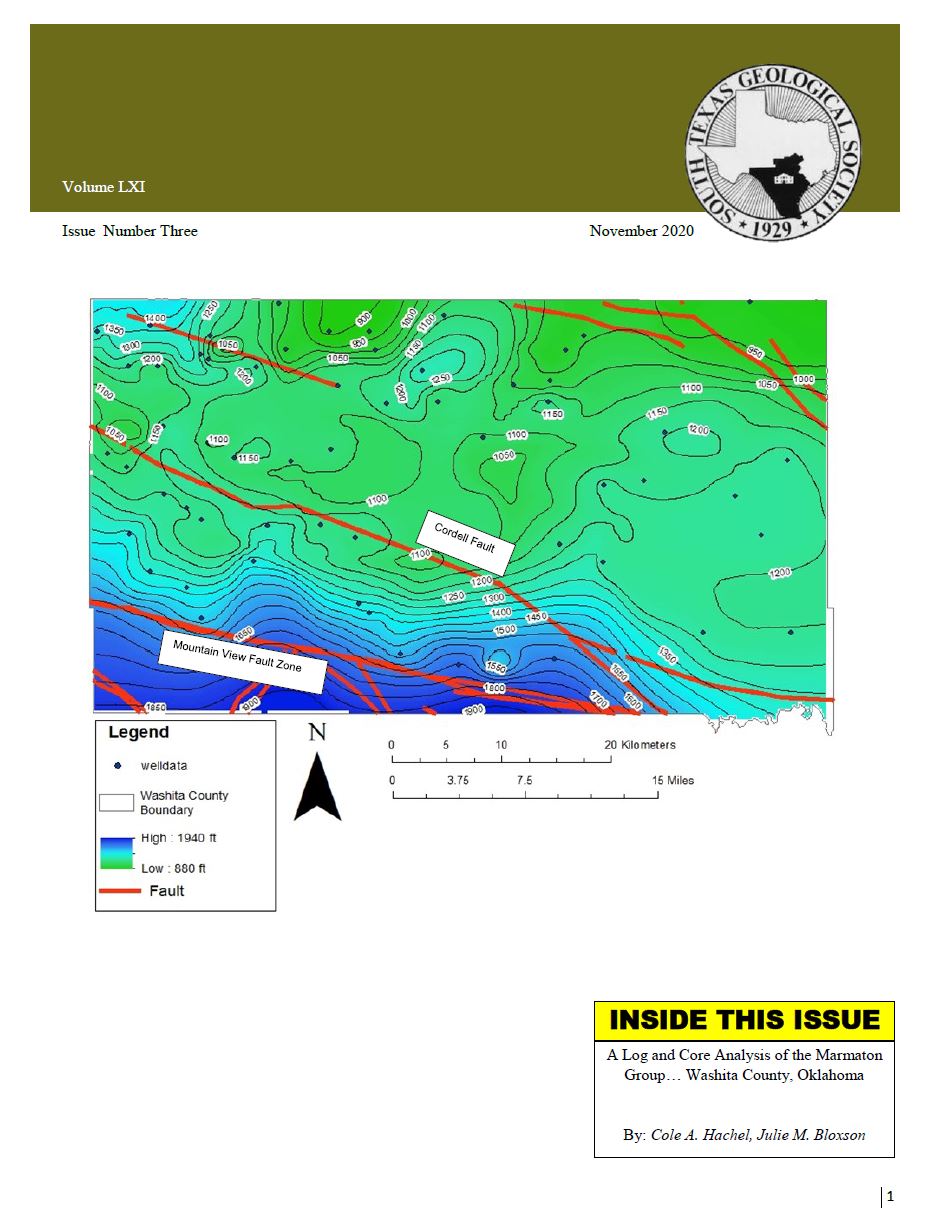 A Log and Core Analysis of the Marmaton Group, Granite Wash Fan Delta in the Anadarko Basin, Washita County, Oklahoma
AUTHORS: Cole A. Hatchel, Julie M. Bloxson
ABSTRACT
The Pennsylvanian Marmaton Group, located in the southern Anadarko Basin, is a fan delta system that consists of stacked arkosic sandstones, conglomerates, and shale, and within Washita County, Oklahoma, and are known to be a prolific hydrocarbon producer. The Marmaton Group in Washita County has a highly variable and largely unestablished stratigraphic framework and sudden changes in lithology throughout the region, both horizontally and laterally. This combined with a lack of core or outcrop data has created confusion in the subsurface, and the Marmaton Group has remained largely unstudied in southern Washita County, OK.
This study examined two sets of core, correlated 90 wells logs, and examined thin sections to determine the characteristics of the Marmaton Group in Washita County, Oklahoma. Tops were determined for each of the Marmaton Group intervals (A-F), along with the Skinner Shale. These data were used to create thickness and structure maps of the formations. The two sets of core show a series of interbedded conglomerates, and coarse- through fine-grained sands overlain with shales, indicating rising and falling sea level affecting the delta fan, and creating the unique and striking sediment packages typically observed in fan delta systems. These sediments consist of high amounts of arkosic material sourced just south of the study area from the Amarillo-Wichita Uplift, as confirmed by the thin sections.
Overall, the Marmaton Group is highly variable across Washita County because of the high degree of faulting and mixed lithology of the Granite Wash. The net thickness maps of the Marmaton Group show that the Granite Wash is highly variably throughout the county, although has continuous thickening in the Mountain View Fault System region. This fault system, and other minor faults in the county, have created areas of localized uplift and down-dropping to allow for thinning and thickening of the siliciclastics, respectively. The Granite Wash sediments also were sourced from the southern Amarillo-Wichita Uplift. The flooding zone shales appear to have been sourced from the north, as they are thickest in northern Washita County and thin towards the south. During times of transgressive sea levels, it appears the flooding surface shales were being deposited over a Granite Wash interval from the north increasing the variability of the thickness of the Marmaton Group across the county.