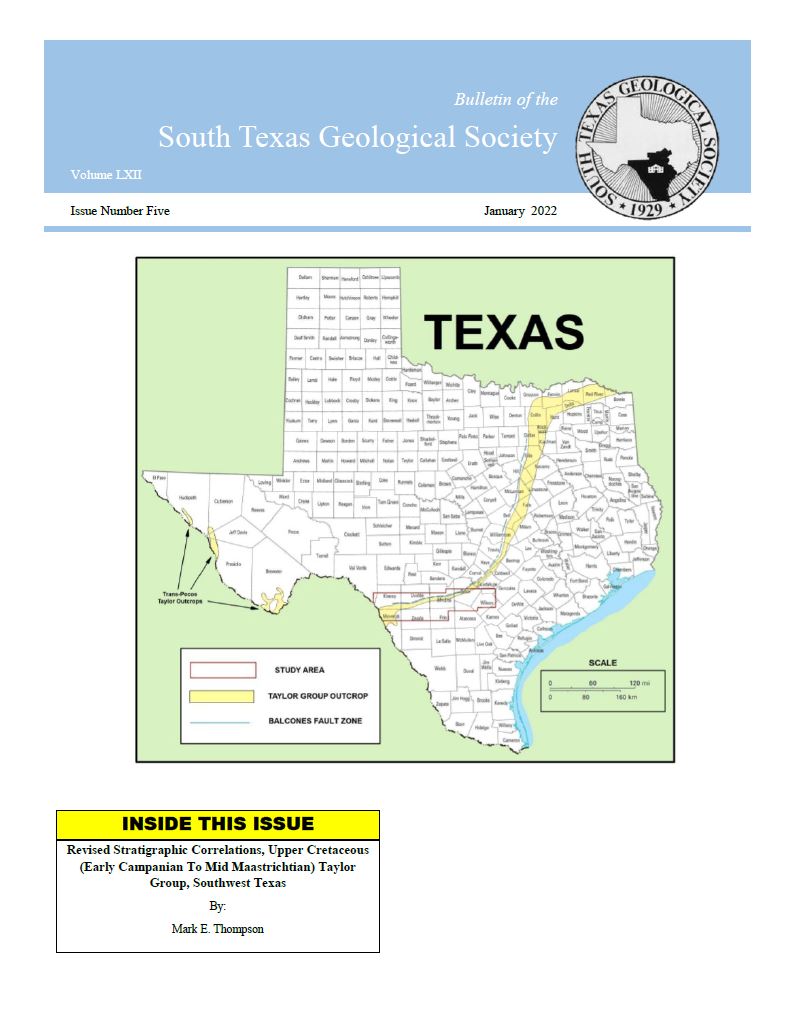 REVISED STRATIGRAPHIC CORRELATIONS, UPPER CRETACEOUS (EARLY CAMPANIAN TO MID MAASTRICHTIAN) TAYLOR GROUP, SOUTHWEST TEXAS
Mark E. Thompson Geologist San Antonio, Texas
ABSTRACT
Established correlations of the Upper Cretaceous Taylor Group in southwest Texas are based upon surface exposures which are small and discontinuous due to effects of the Balcones Fault Zone, truncation by the Bigfoot Unconformity, and cover by younger deposits. A 34 well log cross section extending for 160 miles along the Balcones Fault Zone from Seguin to the Rio Grande River documents a more complete Taylor Group interval than is observed in the adjacent surface exposures. Stratigraphic relations displayed differ from established correlations and revisions are proposed. The Anacacho Formation in its type area is divided into a 450’ thick Basal Member and an overlying 400’ thick Massive Member. The Massive Member occurs in the subsurface from Kinney to Medina County, but it only is exposed at the surface in the Anacacho Mountains. The Basal Member occurs in the subsurface continuously between Seguin and the Rio Grande River and it represents all outcrops of the Anacacho Formation outside the few Massive Member exposures in the mountains. The entire subsurface Anacacho section is dated using correlation to fossiliferous limestone exposures in the Anacacho Mountains and along the Rio Grande. The Basal Anacacho Member contains Late Austin fossil fauna (Early Campanian) while the Massive Anacacho Member is Early Taylor in age (Mid to Late Campanian). These age assignments suggest an upward movement of the Austin-Taylor contact within the stratigraphic section in southwest Texas relative to the central Texas area. The Pecan Gap Formation overlies the Basal Anacacho Member as a westward thinning wedge present continuously from Seguin to Medina County, and some limestone exposures in Bexar and Medina Counties previously described and mapped as Anacacho are actually the age equivalent Pecan Gap. In Kinney and Maverick Counties the Upson Clay overlies the Basal Anacacho Member and never is in depositional contact with Austin Chalk. The Upson Clay represents a rapid westward facies change from the age equivalent Massive Anacacho Member limestones observed in the Anacacho Mountains, and no substantiated evidence exists for the occurrence of Upson Clay east of its type area in Kinney and Maverick Counties. Recognition of an Upper Austin faunal assemblage in the Basal Anacacho Member has implications for long held stratigraphic assignments in southwest Texas. Evidence is presented which documents lime-stone exposures in southern Kinney and northern Maverick Counties previously designated and mapped as Austin Chalk on the basis of fossil content actually represent a continuation of the Anacacho Formation west-ward from the Anacacho Mountains. This includes exposures near Spofford and along the Rio Grande, and a geologic subcrop map supports this proposed revision.