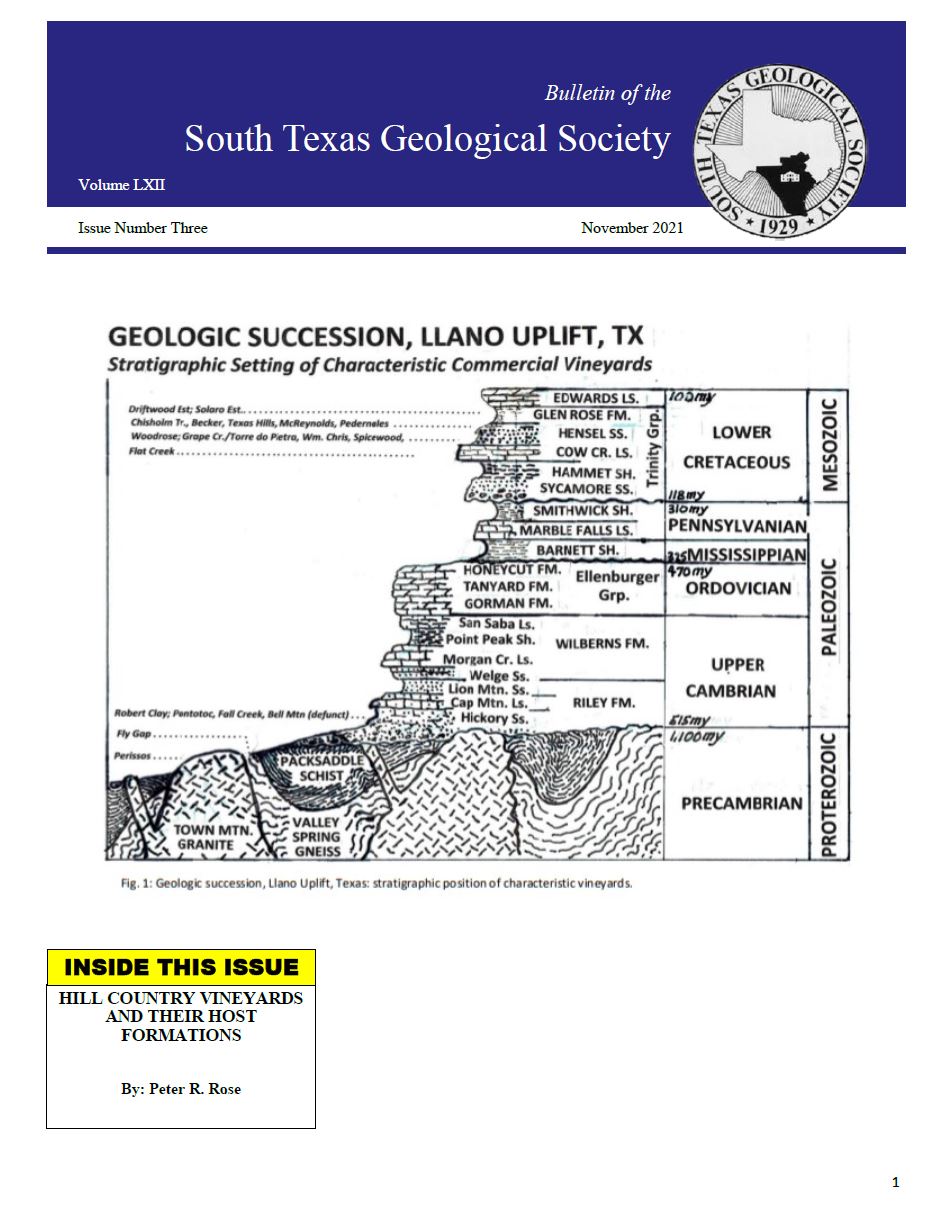 HILL COUNTRY VINEYARDS AND THEIR HOST FORMATIONS
Peter R. Rose
Definitions of what constitutes the Texas Hill Country Appellation vary widely, depending on each writer’s point of view. As a geologist, I am strongly influenced by geological boundaries and vineyard substrates, so I include all vineyards sited on ancient rocks of the Llano Uplift, the football-shaped domal uplift within which Precambrian crystalline and metamorphic rocks, as well as Paleozoic sedimentary formations, crop out. In addition, I include vineyards located on outcrops of basal Cretaceous sandstones, most of which are arkosic, since they were derived from outcropping Precambrian granites and gneisses by encroaching Aptian and lower Albian seas about 110 to 100 mya. Such sandstone formations form a crescent-shaped belt around the southern margins of the Llano Uplift, the main formation being the Hensel Sandstone. Because most vineyards of the region are located upon soils derived from sandstones (because of their inherent higher porosity and permeability, as well as their greater diversity of mineral constituents), I also include wineries sited on Pleistocene and Recent alluvial deposits., in areas of Lower Cretaceous limestone outcrops adjacent to the Llano Uplift. Reluctantly, only because of geographic proximity, I include vineyards located upon monomineralic Glen Rose or Edwards (Lower Cretaceous) carbonate rocks.
Since Texas wine-pioneers Dan and Susan Auler founded their Fall Creek Vineyards at the head of Buchanan Lake in 1975, more than 40 commercial vineyards have been established in the Texas Hill Country, most of them since 1995. Wines from Texas Hill Country vineyards and wineries are receiving growing recognition among national and international wine festivals and recognized experts. Of course, there are also many private vineyards in the region (as defined herein) that grow grapes to supply existing wineries. Growing wine-grapes has become one of the leading agricultural undertakings in the Texas Hill Country!